Replicated after the infamous A-10 Warthog Gatling gun, we bring you our rotating 7 shot bar set with a flask. Our shot glasses and flasks are made from genuine 30mm GAU-8 shell casings, once fired by an A-10 Warthog/Thunderbolt II! These casings are becoming more and more difficult to obtain, making this the ultimate collector's piece for military enthusiasts!

All 30MM items come with a Certificate of Authenticity.

The cannon rounds used to handcraft this set was procured directly from the United States Military. Every shell casing is inspected, decommissioned, and does not contain any active gunpowder or primers, making them 100% safe for use. The Flask stands at 11.25" tall. Both the flask and the set of 7 shot glasses have been professionally anodized in black to preserve their vibrancy.

Although our products do not contain any active gun powder or primers making them 100% safe for use, they resemble live ammunition; therefore, we do not recommend bringing them to locations where live ammunition is not permitted. Not recommend for use by children 12 years and younger. Because our Shell Casings and Projectiles are made from a once-fired US Military round, they may contain minor blemishes or scratches that are consistent with their history.

Very impressive set! I love the look and this is definitely not the average bar set for sure! I've been a fan of the A-10 for decades and now slowly adding more and more A-10 related items to my collection. The base is sturdy, has zero wobble and turns quite easy, but I wasn't expecting it to be veneered wood, so I'll have to see how it holds up. That is the only reason I gave it 4 stars. The flask and shot glasses are very good quality. 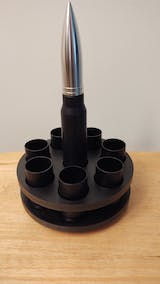 I had ordered the other bar set (with the Ammo box) and I liked this set so much I had to order it as well.
Admittedly, the shell/flask doesn't hold enough booze for a full round of shots, but that's not the point:
This set just looks bad ass and awesome, and I needed it in my home simply because.
Thanks Lucky Shot! 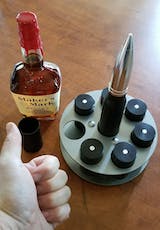 I placed my first order December 7th and it still has not been resolved. I ordered the 30MM Gatling gun set and received the wall mounted ammo box. I contacted customer service December 23rd, when the gift was opened and said that I would pay for a new set to be sent out and I would return the incorrect item. I was told I needed to send back the wrong item first and they would send out the Gatling gun set. I tracked the return and it had been received. I contacted my nephew mid January and he had not received his gift. I contacted customer service again and was told the initial order had not been sent back. I told them I had confirmation it had and asked to have an assistant manager call me. I never received a call so I called back two days later to ask for an assistant manager. He finally called and after much discussion I am supposed to receive a credit of 10%, which I still have not received. In the meantime, I spoke with the assistant manager about an email that I received about an second order processing. He said he would cancel it......well, guess what!? I just received an email that my order had been delivered! My nephew refused the delivery and I have been on hold for 53 minutes today. (Their Saturday website hours are 10-4). I am extremely disappointed with this company!!!! Save yourself time on hold and much stress!!!

Wrong item was sent. I sent back the wrong item, and one month later I am still waiting for my order.

My wife bought this for me as a surprise. It's cool. It's a conversation starter. It holds whiskey. Done. 4 out of 4.

I bought this last year as a gift to myself for Father's Day. It sold out and I was waiting for the next time it was available and bought it for a fellow legacy A-10 driver's birthday! He loves it!

Excellent quality
Everyone who sees this loves it
Great conversation piece
And to toast our men and women who serve our great country.
Worth every dime

Amazing and such and awesome product

We use it everyday. High quality. Fits the office decor.

BOUGHT MY FIRST SET AT THE NAVY SEAL MUSEUM FOR MYSELF, THEM ORDERED TWO MORE TO GIVE AWAY AS GIFTS...
GREAT SET... BIG SHOT GLASSES... EVERYONE THAT SEES IT, WANTS ONE... VERY COOL...